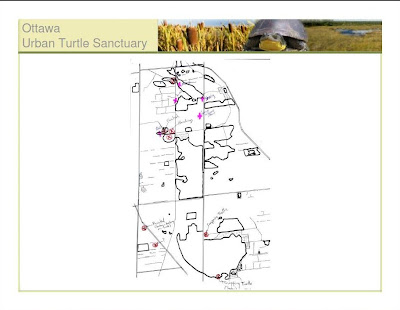 Found this during a google search today:

Just 15 minutes south of Parliament Hill, in the nation's capital you can find the Ottawa Greenbelt.  A place where the federal and municipal governments have managed to preserve local biodiversity and habitat integrity, their contribution to the future.

With the help of the Rideau Valley Conservation Authority, the Blanding’s Turtle wetlands (Sawmill creek Tributaries 8, 9, 10) was added as part of the overall Sawmill Creek clean up crusade.

(Above map of area in between Hunt Club and Leitrim - Uplands to Bank - shows turtle sightings, etc. )

Taken from Ottawa Urban Turtle Sanctuary Presentation: Finding and fighting for road-free refuges in the National Capital Region (2008 or 2009 presentation?)

This is part of the larger Leitrim Wetland south of Ottawa - where they are building the Findlay Creek development.