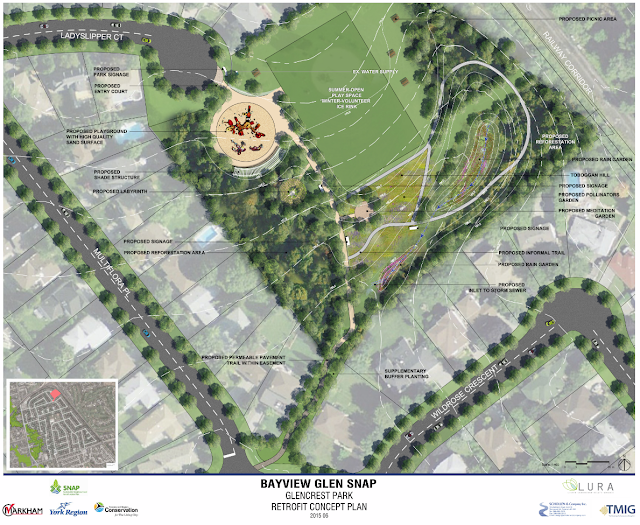 On September 28 the Markham’s City Council approved the proposed design concept for Glencrest Park and endorsed it for implementation in 2015-2016.

The updated Glencrest Park will include a modern playground and a shade structure near the entrance to the park at Ladyslipper Court and amenities such as a labyrinth, a meditation garden and an open play space. A proposed trail system will connect key features within the park and will provide an off-street pedestrian linkage between Laureleaf Road and Ladyslipper Court.

The re-creation of the valley feature with raingardens will transform the landscape within Glencrest Park from maintained turf to a rich mosaic of ecotones, creating a naturalized landscape and supporting the attenuation of stormwater runoff. A looped trail system of approximately 600 m surrounding the raingardens and the mediation garden will afford opportunities for walking and jogging within a naturalized landscape setting. Tree planting is proposed extensively throughout the park with the intent of expanding the tree canopy and promoting evapotranspiration.

Glencrest Park has received a $60,000 grant from the RBC Blue Water Project. This grant will support the implementation of the raingardens and tree planting and creation of a naturalized landscape that enhances the evapotranspiration and infiltration of stormwater.

Link to Map
Posted by Urban Girl at 7:33 AM No comments:

Chimney Swift population decline is not due to lost habitat. 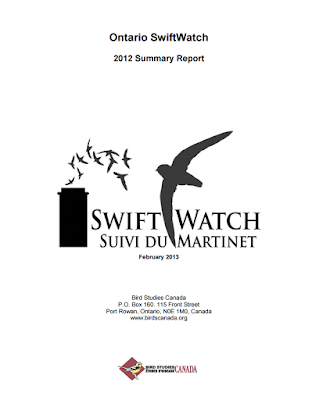 Just came across this Chimney Swift study "Swift Watch - Summery Report" published in 2012.  It has some great findings about the preference of Chimney Swift habitat and the availability in Ontario urban cities.


"These descriptions revealed that Chimney Swifts preferentially used chimneys with a greater length exposed above the roofline of the building and a greater inside area than those available to be used. The average chimney used by swifts extended 2.86 m above the roofline and had an internal area of 1.0079 m2.


We also found that 73% of active chimneys were found on non-residential buildings. Interestingly, the majority of building types surveyed by volunteers were residential houses (63%), followed by commercial buildings. However, the building types with the highest number of sites occupied by swifts were commercial (mostly found in downtown urban habitat), churches and schools.


... We found that among 139 open and suitable habitat chimneys available, only 24.4% were actually occupied by swifts. These results suggest that in urban areas there is more nesting habitat available than being used by Chimney Swifts and it is likely that declines in Ontario’s swift population are primarily driven by a process other than habitat loss, such as prey abundance and availability."

They also did a study on natural nesting sites in both logged and unlogged areas in Ontario.  It would be great to know more about the study area (is it in Southern Ontario or Northern Ontario?) and whether there are preferred spots and distances away from cities where Chimney Swifts choose these sites. I've never read about chimney swifts nesting in anything other than chimneys!

Here's a bit on that study:


"Deciduous trees hosted 24 used sites, whereas 17 used sites were in coniferous trees. The most commonly encountered tree species to host nesting or roosting Chimney Swift were: white pine, sycamore, yellow birch, and cypress. In three reports, the entrance used by the Chimney Swifts was an entrance previously created by Pileated Woodpeckers."

You can read the full report here: http://www.birdscanada.org/download/CHSWONReport.pdf

And this newspaper article reports on Chimney Swifts nesting in hay barns out on the East Coast:


"NOVA SCOTIA NATURALLY: The world of spectacular swifts"
written by Donna Crossland  published on July 19, 2015 in the Chronicle Herald.