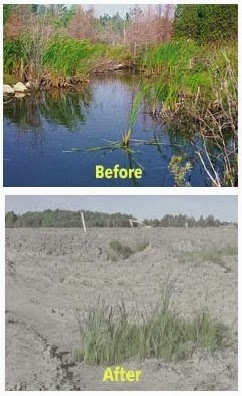 Located in the southern part of the City of Ottawa, Leitrim Wetland is one of Canada’s finest examples of a complex wetland ecosystem and has been identified as a North American “biodiversity hotspot”. According to the Canadian Wildlife Service, “Leitrim Wetland is clearly an area of outstanding ecological significance”. Aside from containing a range of plants that is unparalleled in North America, Leitrim Wetland supplies cool, clean water to Findlay Creek – one of the most important streams in the South Nation River watershed. It is home to many rare and threatened species as well as plenty of wildlife and even boasts an old growth forest, including white pine in which Great Blue Heron nest. It is a Provincially Significant Wetland (Class I under the former classification).


Local conservation groups launched a lawsuit late last week challenging the Ontario Municipal Board for allowing the second phase of the Findlay Creek Village housing development to proceed despite concerns that it could devastate the 9,000 year old Leitrim Wetland in the south end of the City of Ottawa.

Seven years later what has happened to Leitrim Wetland?  Greenspace Alliance has a great page providing many of the details: Saving Leitrim Wetland but nothing has happened on the forum for over two years. Looks like another wetland lost for Ottawa.

And it still seems that the wetland continues to be threatened:


In November 2010, further to a quick decision by the City of Ottawa Planning Committee in October, developer Shenkman Corporation began cutting trees before the winter freeze (reason given) in the Leitrim wetlands complex north of the Ottawa Airport. The project aims to build a hotel and convention centre. The trees were cut down in a wetland in which the Province of Ontario is conducting an assessment in order to designate it as a Provincially Significant Wetland. The National Capital Commission (NCC) was advised of the issue very recently, but the notices given to the City of Ottawa were ignored. Despite the location of this land in the Greenbelt, it is the property of Transport Canada but leased to the Ottawa Airport Authority, which claims that land belongs to it in the context of the agreement between Transport Canada and the Airport Authority.

Detailed summary of the project is provided at J. Sankey's blog (information on the project from the 90's onward at John Sankey.ca)  This affects Blanding Turtle habitat - see other blog post "Wetland Area in Greenbelt (2012)" for more details.

There is a rail-trail to the left of the wetland off of Albion road that goes all the way to Kemptville.

The Ottawa Field Naturalists' Club has also written three articles about the Albion Roads Wetland - found here: "Leitrim Wetlands"  Some great points from OFNC about the significance of this wetland include:


- Its flora is not duplicated elsewhere in North America.

- It is unusually complex, resulting in a high degree of biodiversity. (It has been listed as one of Canada’s “hotspots” of biodiversity.1038 species of organisms identified to date).

- It contains more regionally significant plants than the Mer Bleue, a Ramsar site, even though it is only one-tenth the size.

- It harbours patches of old growth trees — up to 250 or more years old.

- It contains 90 species of resident or breeding birds, including a sizable rookery of Great Blue Herons nesting in the tops of ancient White Pines. During migration times, up to 150 species of birds can be seen in the wetlands. The Red-shouldered Hawk, a vulnerable species, nests in wooded part of the wetland.  (OFNC)