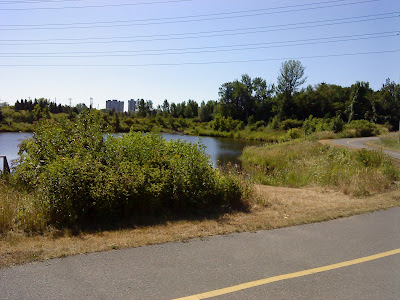 Interesting study by Christopher Hassall from the Department of Biology at Carleton University entitled:

Here is the summary from the weblink:

This project investigated the biodiversity of urban water bodies used for storm water management in Ottawa, Canada. Preliminary findings suggest that some of these managed water bodies contain similar levels of biodiversity to unmanaged, "natural" water bodies, although there are a number of highly degraded managed sites with very low biodiversity. The presence of fish in 10 out of 20 managed ponds suggests relatively healthy ecosystems. Analysis of mosquito monitoring data suggests that the presence of managed water bodies does not affect the number of mosquitoes in an area. In conclusion, urban ponds can contribute ecosystem services including storm water management and biodiversity without increases in insect disease vectors.

Rideau Valley Conservation Foundation – Manotick, ON
Graham Creek Restoration Project
Founded in 1970, The Rideau Valley Conservation Foundation is a registered environmental charity that works to protect and conserve the Rideau River valley in eastern Ontario. The Graham Creek Restoration Project, located in a public park, will focus on restoring a section of the tributary creek through a combination of bioengineering techniques and public shoreline plantings.

Sustainable Living Ottawa East (SLOE) – Ottawa, ON
The Children’s Garden – Sustainable Living Ottawa East created Ottawa’s first public garden four years ago. Designed for and with children, the SLOE garden is dedicated to teaching kids how to grow food organically right in the middle of the city. The garden has built links with schoolchildren and youth groups, attracted families to events and provided sanctuary for anyone who wants to escape into the wonder and magic of this urban oasis. This season they will continue to offer programs and activities that provide children with hands-on opportunities to engage their curiosity about the natural world through gardening and nature-based activities.

Sustainable Living Ottawa East – Ottawa, ON
Community Park Participatory Planning - This project is Phase 2 of a community park planning process developed by SLOE in consultation with local community members.  SLOE staff will work with community members to develop a plan for a local park and protected forest area through various hands-on activities and educational tours of the site.  This project will also see the installation of more educational signage along a pathway in the park with information on native plants in the area.
Posted by Urban Girl at 2:40 PM No comments:

"Waterstudio has designed a new concept for high density green spots in a city, the sea tree. This sea tree is a floating structure that hold in many layers green habitats for only animals. Under water the sea tree provides a habitat for small water creatures or even when the climate allows it for artificial coral reefs. The cost for the shown Sea Tree design is estimated at 4.5 million dollar."

More on their website.
Posted by Urban Girl at 11:33 AM No comments:

Fortum Active - an energy generation idea from Scandinavia.  Check it out on You Tube:

They are also doing this in Philadelphia - check out Green Revolution!

Posted by Urban Girl at 6:17 PM No comments: From the: Sustainable Cities Collective

Image via Streetsblog San Francisco. Thanks to David Mann on Pinterest for the find.
Posted by Urban Girl at 1:34 PM No comments: 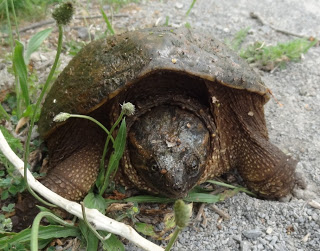 At a wetland restoration course I attended this summer, I met someone from Hamilton Conservation who mentioned an interesting project to protect turtle habitat and nests.  This was during a day-trip where the class saw some man-made turtle basking and nesting sites that South Nation Conservation had implemented. They were along Chippenhook Creek (where it crosses Skakum Road).  The Hamilton project took it one step further, in that volunteers monitored the nesting sites and protected them against predators during the summer and then helped the baby turtles when they are hatching.

Here is some information about the project:
- Turtles move from their wintering sites in late May and their peak nesting period is mid-June.

- Dundas Turtle Watch volunteers identify, monitor and rescue turtles at risk from traffic. Cootes Paradise (where this work is being done) is a remnant marsh near McMaster.
- Female turtles of some species take approximately 16 years to reach breeding maturity so the protection of females of breeding age is essential to their survival.
- Volunteers also protect nests from predation wherever possible - this is done by identifying and marking sites and also putting grates or chicken wire on top of the nest.
- Volunteer work begin in late May, with a summer break usually in July and part of August. Then the monitoring starts again as the eggs begin to hatch and continues through September.

The Dundas Turtle Watch project targets the Snapping Turtle (on Federal lists as a 'species of special concern') and the Blandings Turtle (which is endangered). There may be only a single breeding pair left in Cootes Paradise.  This project is organized in close cooperation with the Royal Botanical Gardens (RBG), whose qualified staff provide orientation sessions for the volunteers. All the information gathered is relayed to the RBG and the data is used for educational and research purposes. Full details are here.

The Turtles At Risk Study in South Nation, (which received funding from EC's Habitat Stewardship Program), will hellp "better understand turtle distributions and enhance turtle habitat by identifying and mitigating threats through the utilization of inventories, community involvement, and stewardship activities".

Image from Louise Daughter Blogspot
Posted by Urban Girl at 6:42 PM No comments: