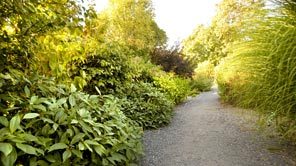 Hedgerows may conjure up thoughts of the U.K. countryside or even parts of rural Canada but perhaps there could work in urban settings also?  It would be an opportunity to add beauty and biodiversity to parts of the city.  They could be used to line edges of a public park or they could be considered for infill development defining the border between neighbours.  Hedgerows could also be used along some parkways or as a transition from fields to forests.  In urban areas lighting would be key to address concerns of safety and a balance between busy corridors and quieter spaces would help create some access for wildlife.

Hedgerows provide plenty of benefits including aesthetics, buffers for noise and barriers for privacy.  Softscaping  can be less demanding on your pocketbook and it can help attract birds and other wildlife - forget bird feeders and bags of seeds - you can choose attractive plants that produce fruits!

Hedgerows: Bringing the Countryside to the City by Maria MacRae (I Can Garden)

"The classic English hedgerow can be adapted to modern urban and suburban gardens just fine, helping add color and texture to smaller gardens while also giving shelter to birds, bees, butterflies and more...

I started thinking about the value of city hedgerows when a designer friend told me how an urban client had nixed her suggestion of a huckleberry hedge. The designer was hankering to see a pruned huckleberry hedge that flowered in spring, burst with berries in summer, then flamed red in autumn. You can imagine the designer's disappointment when her client chose to plant boxwood instead.

Just think if the client had taken a chance with the huckleberries, and perhaps mixed in oakleaf hydrangeas for bold leaf and summer bloom. And maybe added mahonia for fragrant winter flowers, and evergreen huckleberry (Vaccinium ovatum) for yet more berries and year-round foliage. The effect would be lovely, productive and practical in all seasons, and so much more noteworthy and wildlife-friendly than boxwood."

Hoping that the image of huckleberries, hydrangeas and mahonia gets you inspired... check with a local nursery for local indigenous plants that would create the best habitat for native species.  Here's two resources to get you started: