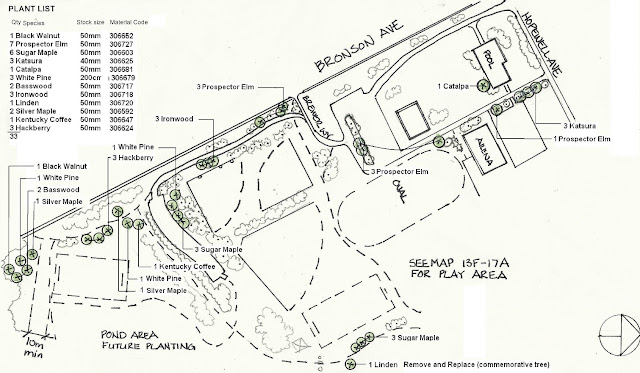 - Last year they held two expert-led birding outings in May and September.  They were given by Bruce DiLabio and enjoyed by several dozen local residents, including a half dozen youngsters. In May they toured the neighborhood to see what birds live and/or migrate through Old Ottawa South and in September they expanded the tour to include other neighborhoods including Brantwood, Windsor, Brewer, Lansdowne Park as well as Dow's Lake and Sawmill Creek. The idea was that participants would learn about some of nature’s most exquisite animals without having to clock mileage in a car and to open eyes and ears to the beauty of birds that can be found in the city.

- As mentioned before there was an inventory of trees in Brewar Park completed last fall.  As part of this project the City is planting new trees (of various ages - you can see the diameters above).  It's great to see so many partners involved in this project including Carleton University, the Community Association, the Canadian Biodiversity Institute along with local businesses.   More details on this project are here.  The list of trees to be planted include: