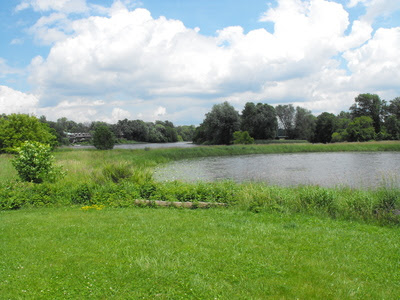 Glad I saved this editorial (below) as now the link is gone. (This blog is like clipping newspaper articles for me - somewhere to keep all the information I read.) It is great to read that the project is funded by developers to enhance natural areas (to replace what has been developped). I hope to read/hear about more projects like this. Perhaps developers should plant 1000 trees per hectare that has been lost or pay for removal of invasive species that are threatening urban parks and waterways (such as periwinkle in Montfort Woods or dog-strangling vine found in Fletcher Gardens and along the canal). The City of Ottawa should start an environmental fund like that (mirror on the gas tax program) where developers are taxed or pay heavy fines depending on how much ecosystem is lost during construction of new suburbs.

Construction timing window (dependent upon getting all permits) is hopefully from August to October. The restoration project would reconnect the pond to the Rideau River and create a wetland shoreline adjacent to the sports field.  This would allow fish year round access in and out of the pond and by altering elevations allow more diverse submergent and emergent aquatic vegetation in the pond. The wetland portion would also provide a suitable environment for fish spawning,and improve water quality for the Rideau River.

Editorial: Nature in the city

Springtime in the city doesn’t have to smell like dust and concrete. It can also smell like ponds waking up, plants bursting and small eco-systems coming back to life. Supporting nature, beyond simply grass and trees in parks, helps keep a city healthy in many ways.

Ottawa is blessed with plenty of wildlife just outside the city, which can improve the quality of life of those who can get to it. But nature within the city can have an even greater effect on neighbourhoods and the way people live.

Which is why the restoration of a pond at Brewer Park in Ottawa is worth celebrating. On a scale of, say, the reconstruction of Lansdowne Park or downtown LRT stations, it may seem like a small thing in the life of the city. But its value should not be overlooked.

The plan being carried out by the Rideau Valley Conservation Authority, along with provincial, federal and private partners, is to reconnect a pond at Brewer Park to the Rideau River in order to build a year-round habitat for fish and other aquatic creatures. A particular focus of the project — which has been in the works since the 1990s — is to build a habitat for muskellunge, which is one of Canada’s largest freshwater fish.

The pond was created decades ago from existing islands in the Rideau River by Brewer Park and Carleton University in order to build a swimming hole. The swimming area was not used long because bacteria buildup in the stagnant water made it unsafe. Reconnecting the river and the pond will allow for the regrowth of wetland habitat in the area which should be home to fish, birds and other aquatic life.

The project is moving ahead now because there is private funding from Minto and Richcraft, under the Fisheries Act. The two companies are involving in building an urban community in the city’s east end, where there will be a net loss of fish habitat. Their funding for the Brewer pond project is compensation.

The Brewer project suggests that development and wildlife can both have a place in a healthy city. Ottawa residents can already head to places such as Mud Lake, Green’s Creek, the shoreline of the Rideau and Ottawa rivers and more in central Ottawa to see wildlife. Soon there will be a new stop for nature lovers.