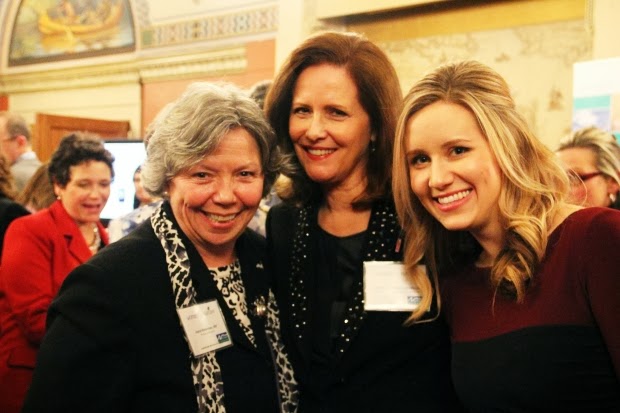 "It was on Parliament Hill, in Centre Block, where about 150 guests and one well-mannered great horned owl named Darwin attended the launch of Women for Nature. The event was hosted by Nature Canada and senators Janis Johnson and Nancy Greene Raine with nature-loving MPs Stella Ambler, Linda Duncan, Joyce Murray, Kirsty Duncan and Elizabeth May.

The female politicians are part of a new and expanding group of influential women who are using their skills and leadership to connect more Canadians to nature while also raising awareness for Nature Canada, a non-profit organization working to preserve and protect nature.

Serving as honorary chair is Johnson, who spoke about her childhood summers fishing off the dock and catching frogs in Gimli, Man. “Nature was my world,” said Johnson, who still loves to fly-fish. Her colleague, Greene Raine, summed up nicely the way nature helps to rejuvenate us. “It lets us connect with powers that are bigger than what we find in the city,” said the Olympic ski legend from British Columbia. “We get tired in our humdrum day, working all the time. We get refreshed when we step out into the nature.”

Guests included a mix of politicians and sponsors. Canadian Museum of Nature CEO Meg Beckel is a founding member of Women for Nature. So is prominent Ottawa-based photographer Michelle Valberg. Coincidentally, she’s been snapping a lot of shots of snowy owls due to their unusual migration, known as an irruption, here in the region."

(Great new effort (hopefully they recognize that nature is IN the city also!)
Posted by Urban Girl at 4:53 AM