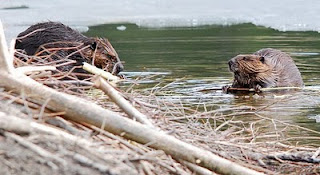 You may have heard the news this summer, that there were some beaver attacks on dogs in a Red Deer park. What was really heartening was that the dog owners did not side with the City and demand that the beavers be killed - there seemed to be some degree of appreciation for wildlife which was great. Unfortunately this story didn't end well, with one beaver being shot (by a lone vigilante?) but in the end the City changed its stance:

"the City of Red Deer will not remove or relocate the park's six to 12 beavers, because no beaver attacks have been reported since the weekend, said Trevor Poth, the city's parks superintendent.

"We see no need to trap or relocate any beaver at Three Mile Bend at this time," Poth said in a news release. "We will, however, continue to monitor the situation at the park and educate park users."

The city has installed more signs in the park warning people of aggressive wildlife and reminding dog owners to maintain control over their pets in the off-leash park."

The Humane Society of the United States (HSUS) has a great resource on their website providing information on a little over twenty "wild neighbours" that we may encounter in urban areas. The beaver is one of those neighbours. This is a great place to learn more about these impressive creatures!

In Ottawa, the Ottawa Carleton Wildlife Centre can help people with beaver conflicts. An article in their Spring 2010 newsletter, details how they worked with concerned neighbours in the Graham Creek area who wanted to learn how to live with the beavers rather than trap and get rid of them. The OCWC has also worked with Fletcher Wildlife Garden to help overwinter a visitor in their pond.

The Fur Bearer Defenders (located in Burnaby) also has a campaign to help beavers:

"The main goals of our beaver campaign are to:

** Flickr photo by Keith Williams
Posted by Urban Girl at 7:23 AM