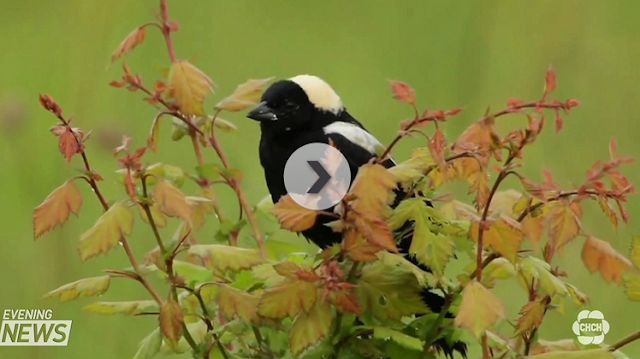 Interesting project in Hamilton - so great that they are creating Bobolink habitat!  From the webpage:

Hamilton’s Bobolink community is getting the boot from their current home in Greensville and being re-located to a former dump.

The city is hoping that the “threatened” bird species, will feel right at home at the old Upper Ottawa Street dump.

Bobolinks had been living behind Greensville Public School but their habitat has been taken away by the construction of a new Johnson Tew park and arboretum.

“The likelihood is that they will continue to be there until the trees start to grow up, then the Bobolink don’t like that habitat as much.” said Cynthia Graham.

The city is hoping to entice the Bobolinks to move here, to the old Upper Ottawa Street dump, but the Bobolink is a very picky tenant, and the city will have to cut down some trees and plant prairie grasses in order for the birds to feel more at home. And the Bobolinks don’t like visitors.

“It already is grassland, so there is the potential to establish the habitat they like which is mostly grasses. It’s restricted to public access and bobolinks are birds that don’t like a lot of disturbance.”

They are an elusive bird, and are considered “at risk.”

“Certainly the Bobolink are suffering because of habitat loss across their range, so whatever we can do to create habitat suitable for them is within our mandate to do so”
When they are in town, the nesting birds prefer staying on the ground in tall grass or crops.

“The reason we chose that is because it has potential to be Bobolink habitat, but they’re not currently using it to full extent, so there’s an opportunity for enhancement.”
The move is estimated to cost $120 000 and another $200,000 is being requested from the city’s park project budget next year, to cover consultation with bird experts, and ongoing monitoring of the success of the project over the next 20 years.


http://www.chch.com/relocating-at-risk-bird-species/
Posted by Urban Girl at 7:02 AM