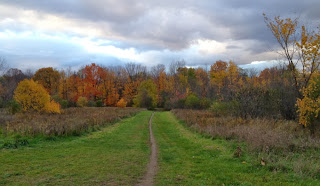 What is a healthy forest?  Can there be such a thing as a healthy forest within an urbanized area?  What would a forest need to support certain "forest species"?  Certain species seek out "interior forest" - a denser part of a wooded area that is buffered by other trees which support the interior core.  This core is more stable and healthy as it is not affected as much by edge species (both faunal and floral) and thus can provide the type of habitat that "interior species" are looking for.  Landscapes ecologist speculate that an ecological buffer such as this needs to be at least 100 metres.  In reading the Ontario Nature fact sheet on fragmentation, they state that using this 100 metres as a guideline that a circular forest needs to be at least 8 hectares to have one hectare of interior forest.  And in some other articles I have read, the minimum stated for a healthy forest (that has some dense interior "forest" that would attract forest species of birds) would be 10 hectares*. But most articles and studies state that this is a very difficult measure to determine and many feel that 10 hectares is too small to provide any such habitat for birds or other interior forest species.

This Forest Fragmentation Study lists certain birds that are more affected by the size and some that are less sensitive to the size:   "Area sensitive birds identified in this study included the Ovenbird, Acadian Flycatcher, Kentucky Warbler, and Red-Shouldered Hawk.  The least area sensitive species were mostly species that were not truly interior birds such as the Carolina Wren and Great Crested Flycatcher."

So does Ottawa have any wood lots of approximately that size (remembering that this is a MINIMUM size)?  And what types of birds can be found in these area and around the city in general?

First of all, Ottawa does have two wood lots that are around that size, but unfortunately neither of them are protected, conservation land.  Here are the two woods: 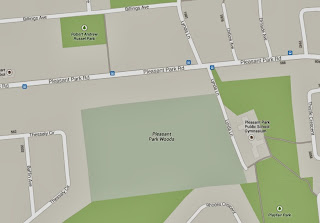 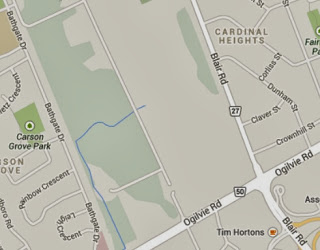 Some forest species that I have been on the look out for are the Red-Eyed Vireo, Brown Creeper, Rose-breasted Grosbeak, Pine Warbler, Ovenbird and the Nuthatches.  OBBC has had volunteers survey the city for birds for the past 5 years and through both Point Counts (some along Bathgate Drive) and Census Plot (Pleasant Park being one of them) forest species birds have been confirmed in these areas.  The map below confirms abundance (not individual observations): 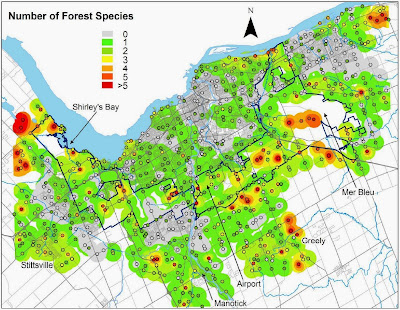 Presently the NRC is doing a large construction project on their property.  The good news is that they are trying to protect as much of the forest as possible.  Details are available on the Government of Canada website:

"PCL has already started to work on site preparation by removing trees to make way for the construction of the new facility. Many of the trees found on this lot are of the ash species and have been confirmed to be infested by the emerald ash borer, a major threat to Canada's environment and forest resources. As the movement of infested tree material is highly regulated, PCL will take all precautionary measures to dispose of the trees as per Canadian Food Inspection Agency regulations . It should be noted that 90 percent of the maple grove located in the northeast corner of the site will be preserved, as well as 55 to 60 percent of the existing woodlot.

Once construction is completed, there is a reforestation plan in place that will include planting more than 1000 new trees, primarily near the western edge of the site, along Bathgate Drive.
Final landscaping should be expected to be complete by November 2014.

The new facility will include walkways in the reforested area along Bathgate Drive extending up to the National Research Council (NRC) campus and the extension of the existing sidewalk along the east side of Bathgate Drive."

This summer get out and enjoy these gems that provide habitat for some endangered and rare species (especially in urban areas!).

P.S. Should we be planting more native trees as per Diana Beresford-Kroeger?

* Cornell Lab Of Ornithology - Improving Habitat for Forest Thrushes (pg 8)
Posted by Urban Girl at 9:33 AM