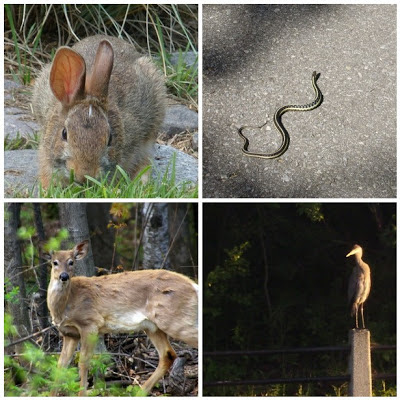 Amy's picture of the Eastern Redback Salamander found in Rockcliffe Park reminded me of other great nature sightings in the city:

Eric Darwin, blogger of West Side Action posts some great pictures of animals in his blog, as he's an active cyclists and pedestrian.  Some of his nature photos include turtles basking, comorants on the Ottawa River and beavers in lebreton flats.  The two I've included here are a snake along the bike path and a great blue heron on the Rideau Canal.

Also Fernando Farfand who is active on Flickr managed to capture the deer in Rockcliffe Park, the same year, my partner and I saw it (but only managed to get a blurry photo of its rear!).  Another photographer on Flickr had some great pictures of the prolific rabbits in Major's Hills Park.

What type of urban wildlife have you seen this fall?