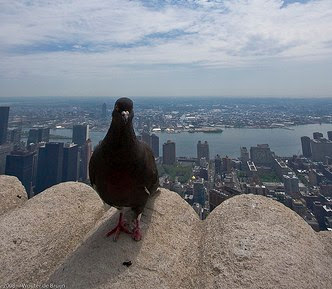 Connected by Nature is a great blog! I really liked this post about the pigeon:

Conserving Nature, or Learning to Love the Pigeon

“Rats with wings.” Is that how you think about pigeons?

If ecologist Matt Palmer from Columbia University has his way, you’ll look at these urban dwellers (and maybe even rats) with new eyes. A handful of new phone apps can also help us to connect with and think differently about wildlife in the city. And that change of mindset may be a vital and necessary step towards conserving the world’s resources.

At a conference on biodiversity sponsored by Columbia’s Center for Environmental Research and Conservation this week, Palmer spoke about the “Pigeon Paradox,” a concept proposed by Robert Dunn and colleagues in 2006....

With more people living in urban areas, the ability to appreciate the nature around cities will be an important “bridge” to caring more broadly about conservation.

As Ahmed Djoghlaf, the executive secretary of the UN Convention on Biological Diversity, claimed: “The battle for life on earth will be won or lost in cities.”