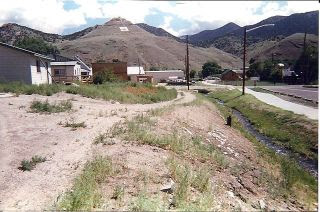 "As I worked my way gradually upstream between trail and creek, I thought about how this block of urban creek and its thread of habitat for people and wilder life has changed. When I first saw this shallow spring creek, it ran ruler-straight between dirt banks thinly hazed by a prickly growth of invasive annual weeds. Chunks of concrete protruded from the dirt here and there, along with oozing spills of asphalt, rusting fence wire and pieces of cast-iron engine blocks, and other remnants of the place's industrial past, the whole festooned with windblown trash.

It was not a thing of beauty. But Richard and I had just purchased the formerly industrial property on the other side of the creek. It came complete with six-foot-high chain-link fence topped with sagging barbed wire, crumbling century-old brick shop building, rusting junk, and knee-high weeds. (Our friends thought we were crazy.) Richard wanted the place for the shop, which he had already restored in his mind's eye for an office and studio; I was drawn to that slender thread of water.

I have always wanted a creek to play with, and I was not daunted by the shabby condition of the one I got. Right away, before we pulled up the posts and removed the fence around the property (we donated both to the town public works department), before we hauled away many construction dumpsters of unidentifiable industrial detritus to clear a space for our house-to-be, before Richard cleared the old shop building down to its beautiful timber-frame and brick bones and fixed it up, before we built our house and planted wildflowers and constructed our kitchen garden in the embrace of one old u-shaped stretch of cement wall left from the property's industrial past, we set to work reclaiming the creek.

First came weeding: Richard and I spent whole hot, sweaty weekend days pulling tumbleweed, cheatgrass, and kochia by the trailer-load. We grubbed out weedy Siberian elm trees and Canada thistle. When the annual weeds sprouted from the carpet of the previous year's seeds, we burned them with a propane torch, hoed them, and sprayed them. And then we planted native shrubs to begin the slow process of reweaving the natural community: red-twig dogwood, golden-currant, skunkbrush sumac, chokecherry, Indian plum, rabbitbrush, and my favorite, big sagebrush with its silvery-green leaves and pungent fragrance.

As we weeded and watered the tiny sprigs of shrubs that were all we could afford, other natives returned. Two clumps of streambank willow sprang up just above the creek, their wand-like stems reaching five and six feet tall and casting lacy shade over the bare bank. Soon more clumps of willow appeared, sprouting from the underground roots of those pioneers. Indian ricegrass, with its cloud of seedheads, appeared on the dry upper bank, along with purple aster and scarlet globemallow.

Over the decade-plus since, we have urged the native plants along in recolonizing this block of formerly blighted creek, spreading seeds here, pulling weeds there, planting a few more shrubs, plus a rescued clump of wild Rocky Mountain irises, and a couple of cottonwood trees. We have watched the butterflies return on fluttering wings to feed from the wildflowers and lay their eggs on their favorite plants, the bees buzz in to gather pollen, and the hummingbirds hover, sipping nectar. We have heard Northern dippers practice their warbling songs in the concrete culvert where the creek goes under the street, and seen tiny trout flash in the water under the shade of the willows."

Found this through a link from The Tangled Nest Blog. She also has a great post on the other restoration work her and her husband did on the industrial land and their house: Lighten Up - Living On Less 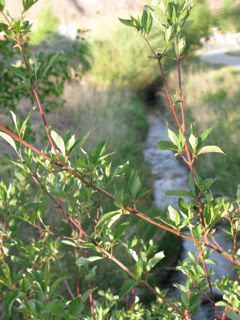 Read about riparian buffers and the three levels of stream restoration (2011 blog post).
Posted by Urban Girl at 8:25 PM