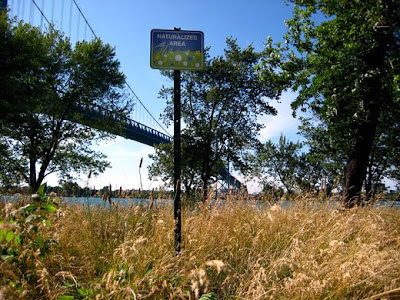 When the City of Windsor was on strike the summer of 2009, mowing parks and other city owned property was halted. Many of these areas became "naturalized" and Broken City Lab had the brilliant idea to do a bit of activism and get people to take notice of these areas in a different way:

From their Blog in July 2009: "We recently decided to demarcate some of many accidental meadows across Windsor with these Naturalized Area signs. In hopes that these signs might momentarily allow residents of Windsor to look at these naturalized spaces for what they are—that is, wonderful additions to our urban landscape—instead of the result of a politically-charged issue, we spent the earlier part of this week designing the signs, getting them printed, drilling holes, and installing them."
Posted by Urban Girl at 7:18 PM