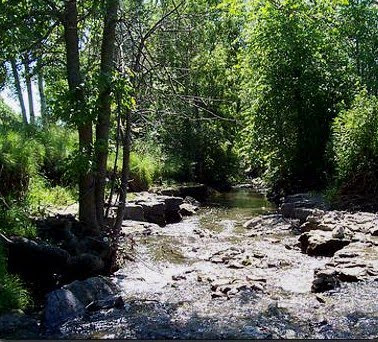 The City of Ottawa wants to rehabilitate an urban stream in the west end that frequently floods because of surrounding developments, and says the plan could be a template for similar streams in the city.

Pinecrest Creek, a four-kilometer-long tributary that flows from Algonquin College into the Ottawa River, can rise by more than two metres after a rainstorm, ruining the shoreline and killing the aquatic life.

Jennifer Lamoureux, a biologist with the Rideau Valley Conservation Authority, says the conditions also mean that oil, salt and pet feces run from neighbourhoods into the waterway after rainstorms and eventually the Ottawa River, just upstream of Westboro Beach.

"It does get into Pinecrest Creek," she said. "There is very little control, if any, as far as filtration."

To deal with the creek's woes, the city is working on a proposal that will be released this fall. Dixon Weir, Ottawa's general manager of environmental services, says the report will encourage property owners to take responsibility for their stormwater run-off.

The plan may include incentives for rain barrels and perforated parking surfaces.

Weir says it's a pilot project that could become a template for managing other urban streams.

"This is a key learning opportunity for the city, and also for the residents, to understand better their impact and their positive contribution and influence they can have on the environment," he said.

Since 2008 the National Capital Commission has been improving the creek's capacity to handle storm water run off and trying to lessen bank erosion:

"The NCC will undertake with the support of the City of Ottawa work to restore sections of the creek experiencing severe erosion or degradation to a fully-functioning, natural system. The proposed approach follows natural channel principles that enhance fish habitat while mitigating erosion forces. The following modifications are proposed at many restoration sites within the 2.3 km natural creek channel to help the creek system deal with erosion due to increased flows and steep hydrographs:


- Increased channel capacity and increased access to adjacent floodplain areas by the use of proposed floodplain pools, cutting back the channel side slopes, and the creation of shallow floodplain benches;

- Clearing of channel blockages, such as sediment and woody debris accumulations, channel protrusions which obstruct flow, and mid-channel bars which deflect flows.

Read this 2011 post if you want to know about riparian buffers and levels of stream restoration!
Posted by Urban Girl at 6:58 PM