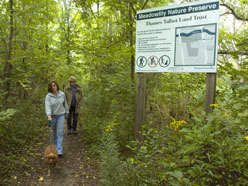 
The cash-strapped Ontario government has quietly slashed its budget for buying significant woods and wetlands, forcing conservation groups to seek private donations to protect the environment.

"Canadians expect the government will look after the environment. The government is not going to do it," said Don Gordon, executive director of the Southwestern Ontario-based Thames Talbot Land Trust.

"Canadians are going to have to do it themselves."

The cuts have come in several ways.

Funding for core programs that help national conservation groups buy and maintain land has been cut in half, from $5 million to $2.5 million. Greenlands Challenge, a provincial fund that provided money to regional land trusts to buy land, has been cancelled for at least one year. Funding for the Ontario Land Trust Alliance, which helps regional land trusts pay legal and survey costs associated with purchases, has been cut 25%.

"The bottom line is, these cuts are impacting very substantially on environmental work being done by volunteers," said Ian Macnab, executive director of the Ontario Land Trust Alliance.

A Natural Resources Ministry spokesperson confirmed the cuts to the three land-buying programs and a "deferral" for at least a year of the Greenlands Challenge. "It is a redeployment of resources," Audrey Tobolka said. The government remains committed to protecting the environment through other programs, and has helped land trusts buy 11,500 hectares of environmentally important land since 2006, she said.

But the NDP's natural resources critic Howard Hampton said the cuts are only the latest from a government that proudly touts its record on the environment while at the same time damaging it. "This is part of a pattern. This government has been cutting the budget of the ministry of natural resources by stealth since 2003," he said. The number of fisheries and forestry workers have been cut across the province, and now in Southern Ontario it will become more difficult to buy environmentally sensitive land, Hampton said. "You are going to have a huge natural environment deficit."

Given a financial deficit reaching $20 billion, the Liberal government is bound to continue cutting, he said.

Land trusts use the money to buy property, already identified by the province as environmentally significant, from private owners. In Southwestern Ontario, the Talbot trust has purchased eight properties, including Meadowlily Nature Preserve in London's southeast end. The lands usually support a rich diversity of species, often including rare or uncommon plants and animals. But the lands also provide an anchor to preserve much larger tracts of land, conservationists say.

For example, the Thames trust is trying to buy the Tanager Tract, a 40-hectare piece of Carolinian forest -- a type of forest with plants and trees more common in the mid-south of the U.S. than in Canada -- near West Lorne. The tract stands at the northwest corner of a much larger, 380-ha forest that's been largely protected over the years but still supports some sustainable logging, Gordon said. The 40-ha Tanager Tract will not only provide a refuge for species during logging or other intrusions into the rest of the forest, but it'll also influence how others use the rest of the tract, he said.

"The thing that makes it even more important is that there are few large natural areas left in southern Ontario."

The Talbot trust has until Nov. 1, when the deal is set to close, to raise the purchase price of $220,000 plus another $65,000 for an endowment fund that supplies an annual source of money for restoration and maintenance work.

The province's Greenlands Challenge Fund would usually supply up to half the money for such a purchase, Gordon said.

"The province very quietly killed the program," he said.

In a bid to get more donations from the public, the Talbot trust is offering tours of the Tanager Tract several Saturdays this fall (visit www.ttlt.ca for more information.) Those land trusts able to find the money to buy land may find it harder to get the funds for the surveys, transfer fees and legal bills for purchases, Macnab said.

Last year, the land trust alliance supported the purchase of 29 properties, but had to turn away another 12 groups seeking help, Macnab said.

This year, with 25% less funding, there could be even more land trusts struggling without the alliance's help, he said.

Image Above: Lisa Sargent-Reed, left, and Nona Irvine walk through the Meadowlily Nature Preserve, a 5.8-hectare piece of property on the south branch of the Thames River and the first property purchased by the Thames Talbot land trust. (MORRIS LAMONT, The London Free Press)
Posted by Urban Girl at 8:09 PM