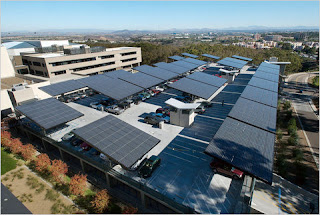 “Parking lots are this wasteland – they’re the last thing that gets attention,” Mr. Noble said in an interview. “Here’s a market the size of Alpha Centauri that’s never been tapped.” In 2005, Mr. Noble founded Envision Solar, now the country’s leading developer of solar carports. The company’s signature product is “solar groves,” 1,000-square-foot canopies that shade parking lots while generating clean power from an array of photovoltaic panels.


The company is now branching out into electric car generation by outfitting its solar canopies with charging stations for plug-in hybrids and electric vehicles. It has developed a pilot project with the Department of Energy’s National Renewable Energy Lab in Golden, Colo., while also working with Coulomb Technologies, a developer of electric vehicle charging stations.