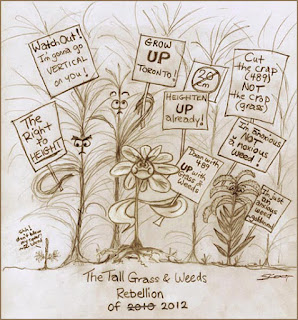 The City of Toronto  is in the middle of changing its Bylaw in regards to "Natural Garden Exemption".  The Local Scoop has a blog post notifying local gardeners to be aware of the changes and provide comments if interested here are some suggestions/concerns:


"The details of the proposed changes are somewhat complicated. As a minimum, you may wish to at least make a general statement incorporating some or all of the following points :


- naturalized gardens are to be encouraged, not discouraged

- they should not require any special permit, inspection or approval process

- in two legal challenges launched by Toronto gardeners, Ontario courts have affirmed that citizens have the constitutional right, protected by the Charter of Rights and Freedoms, to tend a natural garden on their private property and on the city-owned road allowance in front of their property.

The terms "invasive" and "noxious" are bandied about very loosely and incorrectly.

Definition of Invasive (according to Ontario Invasive Plant Council):

Alien Species - Plant, animals and micro-organisms that have been accidentally or deliberately introduced into areas beyond their native range. Synonyms may include introduced, non-native and exotic.

They say they may "request" removal of specific "noxious" weeds, but actually, they demand removal of weeds that are not noxious.

Note: Under the Weed Control Act (Ont.), the only species listed as a noxious or local weed in the City of Toronto is Purple Loosestrife (through a bylaw). Ragweed and Poison Ivy are not invasive because they are native species. However, they are a human health hazard and should be regulated in urban areas. The Scoop recommends that Toronto declare them as local weeds under the Weed Control Act (Ont.), Section 10. Giant Hogweed should also be included, but is not listed here.
European buckthorn is an invasive species and only noxious in rural areas, i.e., not in urban areas unless regulated as a local weed through the proper channels. E. buckthorn, DSV and Garlic Mustard should all be declared as local weeds. For starters, add Japanese Knotweed, too. Since the Weed Control Act (WCA) applies to both private and public lands, all species declared as either noxious or local must be removed within the municipal boundary. The local weed, Purple Loosestrife must be removed everywhere it occurs in the City of Toronto. If additional species are declared local weeds through bylaws, they must also be removed wherever they are found within Toronto."

Image and Italicized Text from the Local Scoop
Posted by Urban Girl at 3:13 PM