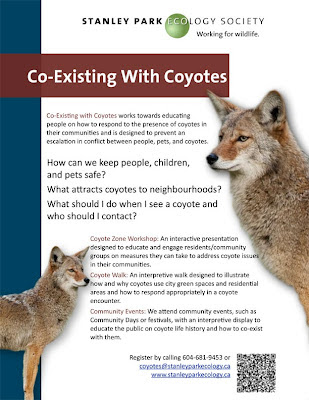 During our tracking class last week, the teacher pointed out fresh coyote tracks on school grounds beside the loggersports field. The campus used to be an old farm and there is a river running on the east and south end, with a small creek running into it. Rabbit, skunk, squirrels and racoons live near or on the property. We've also been told that you can find many different birds including osprey, cooper's hawks, ruffed grouse and owls. When you really think about it, it's amazing who our neighbours are.

In the last couple of years there has been a growing number of human-coyote interactions in different cities across Canada and municipalities have had different approaches to addressing these "conflicts". Vancouver has chosen a policy of "co-existance" which many wildlife centres have praised as forward-thinking. I received an email from the Ottawa-Carleton Wildlife Centre that had this to say:

"In the metropolitan core (Vancouver, Burnaby and New Westminster) there are about 200 to 300 coyotes. Coyotes in urban areas will scrounge for food scraps and pet food left outdoors in garbage or compost — but their main food source in cities are the large populations of rats and mice.

Co-Existing with Coyotes aims to reduce conflict between people, pets and coyotes by providing accessible information through a wide range of media. The program has been developed in cooperation with the Vancouver Park Board and BC's Ministry of Environment in response to increasing public contact with, and demand for information about, coyotes in Vancouver."

Check out their website or email them to find out more: coyotes@stanleyparkecology.ca
Posted by Urban Girl at 7:04 AM