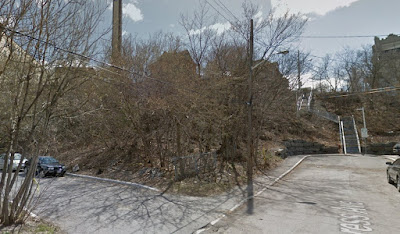 Finally after fifty or more years, Lebreton Flats is being redeveloped.  I've always wondered about the area and all that green space so close to the urban core.  When I was thinking how great it would be for the city to have an Urban Ecology Centre centrally located (when I started my new career in 2011) I thought something off of Bayview would be perfect.  It would be close to the river, along a major corridor (that fauna may naturally follow) and there was all that open green area.  Just a beautiful spot and vista.

I started thinking about this area again today when my friend posted about seeing an urban fox in Chinatown.

"We just saw a fox trotting at a fast clip around Primrose and Empress in Ottawa's Chinatown tonight. It looked she/he was heading towards Somerset before he/she ducked between some buildings. Who knew we'd find a fox in Centretown?"

It would be an amazing sight to see in the evening.  On the Urban Wild Walks we were told that there was a fox denning in the Macoun Marsh area (which my spouse saw this week cross St. Laurent late in the evening) and our Animal Tracks tour leader also found a fox den (although empty at the time) up in Rockcliffe Park (the official park where the pavilion is, not the neighborhood "Rockcliffe Park").  But are urban foxes common in Canada?  I knew they were in parts of the U.K. as I have read and watched documentaries on London's urban foxes.

"London is unique among western European capitals in that it has a fox population of any great size, concedes Trevor Williams, director of The Fox Project, which maintains a wildlife information bureau." (The Star, David Hewitt, 2012)

"Stephen Harris, an expert on urban foxes at Bristol, says no reliable figure has ever been calculated, although he once estimated the number at 5,000 to 6,000 for London's boroughs." (L.A. Times, Christopher Werth, 2014)

London has no urban raccoon or skunk population (unlike here in Canada) but it does have increasing numbers of badgers, weasels, hedgehogs and other small nocturnal visitors.  Each creature has different territory size and the overlap of these territories may vary along with when each is on the prowl.

But back to Ottawa - pictured above and below are the areas that connect Lebreton Flats area to Chinatown (above the ridge) along Empress and Lorne.  There is a very scrubby areas along the ridge in both places which could offer urban mammals including foxes some cover and some easy accessible corridors to explore more urban territories above the ridge. 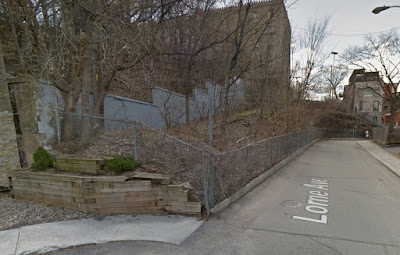 The pink area in the map below is the Saint Vincent hospital property and Somerset is south of this site.  The orange arrow pointing in the direction the fox was going. 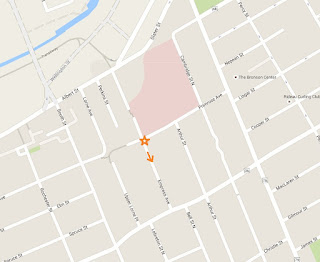 Lebreton Flats (before current redevelopment started) had some great wild green and rocky areas that could offer den locations.  The fox at Macoun Marsh is found in the rocky area beside the marsh.  The den in Rockcliffe Park was dug in soil along the slopes down to the river.

Red foxes are a rare sighting but part of the reason for this is that we keep different hours.  Foxes are nocturnal like our skunk and raccoon neighbours but this still doesn't explain why they are rarely spotted here as I've definitely seen the other two creatures from time to time, so why not foxes?

They have been seen in the Fletcher Wildlife Gardens and the volunteers there estimate that there is just one family that uses the territory.  FWG's webpage indicates that despite being nocturnal, foxes will hunt during the day in the winter but this area with its fields, shrubs and woods is very different than an urban landscape. I'm guessing that urban scavenging is still best done at night when the city is more quiet.  Foxes are solitary and, even in areas where they are known to dwell, are rarely spotted.

The Toronto Wildife Centre states that foxes are more common than realized and can be found near ravine systems, large grassy fields and large parks where small mammals are plentiful (Toronto Wildlife Centre) and the MNR backgrounder states that foxes do den near human areas and are commonly found in many large urban centres in Ontario.

Charlottetown, however is one Canadian city where fox populations are similar to the London U.K. situation where "human-fox interactions are commonplace".  An urban research team studying these foxes "found 89 dens in Charlottetown". (Saltscapes)  Many residents of this city have spotted foxes - they have become a common sight unlike cities here in Ontario.

So my conclusion would be that they are more common than we realize but not as common as raccoons and skunks, which is probably a good thing! 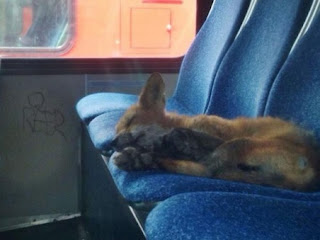 Some other great urban mammal/wildlife posts:

Urban Crows (and supportive urbanites) (May 2011)