the greening of Chicago 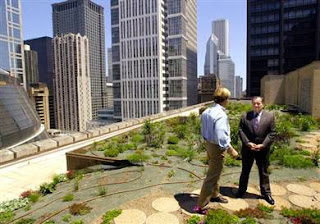 First there was the City Hall's Rooftop Garden (in 2001) and the Green Roof Grant Program which provided grants to both big and small buildings in both the residential and commercial sectors.  By 2008, Chicago was the leading city in the U.S. with the most green roofs according to Green Roofs for Healthy Cities' Annual Green Roof Industry Survey.

Next it was the city's Nature and Wildlife Plan (in 2006) along with a Nature Areas Directory which listed more than 4,800 acres of prairies, savannas, dunes, woodlands, wetlands and potential restoration areas at 98 sites throughout the city. This plan "established a framework to protect and expand ecosystems for the benefit of wildlife and people."

As a follow-up in 2007, Chicago initiated its Green Alley Program which addressed the municipalities infrastructure issues.  The program introduced permeable pavement, bioswales and encouraged residents to consider rain gardens and purchasing rain barrels.

And then after that it was an Urban Forest Agenda in 2009 which would work hand in hand with the already established Nature and Wildlife Plan.  The goal here was to strengthen the urban tree inventory that was already in place and to enhance it with more trees, green infrastructure linking parks and creating programs to enlist local citizens to play a part in their street and park trees.

Now it's the 606 - Chicago's answer to NYC's High Line and the Burnham Wildlife Corridor along the shore of Lake Michigan. 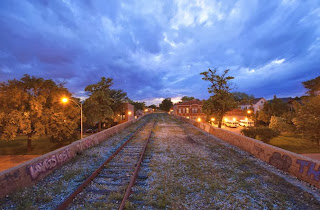 First of all the 606, which will ultimately dwarf the New York City's elevated park, will be 2.7 miles long (the High Line is 1 mile) and will encompass 13 acres of land (adding five new parks).  It will connect four neighborhoods in the northwest end of the city.  One other difference to the High Line is that bicyclists will be accommodated on the 606 (or Bloomingdale Trail) whereas only pedestrians are allowed on the High Line.

For the Burnham Wildlife Corridor, located on the city's south side, the Chicago Park District enlisted thousands of volunteers to plant 125,000 trees and shrubs this summer which will provide a resting area for the 5 million birds that migrate through the city every spring and fall.  Many of them, with no place to land, found themselves colliding with the glass highrises downtown. This project will help ensure the safety of Chicago's avian visitors. 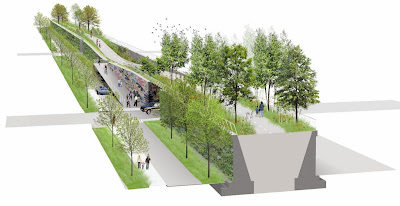 P.S.  Check out my new "urban wild" nature blog: Wild. Here.(2016 update) It would be amazing to visit this city and profile it at some point for Wild. Here.!
Posted by Urban Girl at 9:32 PM