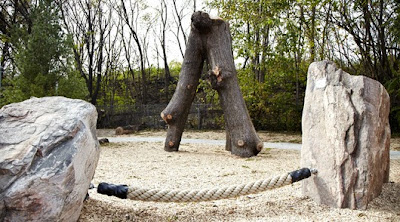 Did you know that the City of Ottawa has a natural public playground?

Ottawa Start first posted about this back in August 2010:

"A new natural playground park for the enjoyment of families at the Fairlea Park in Gloucester-Southgate ward is being built this Thursday through a partnership between the City of Ottawa, ING DIRECT Canada and Bienenstock Natural Playgrounds."

The term "playscapes" instead of "playgrounds" is used:

From Bienenstock website: "Playscapes are Natural Playgrounds. They are designed with the intent to bring children back to nature using: fallen logs, tree stumps for seating, vertical logs for forts, slides embedded in the side of hills etc... Playscapes and Natural Playgrounds offer a wide range of open ended play options for children while remaining safe." 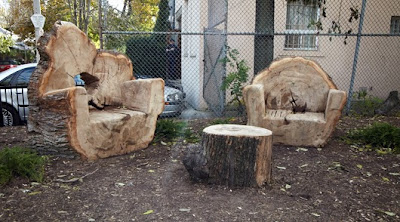 You may have read the 2012 National Post article: Return of Risk: The Growing Movement to Let Kids Play Like Kids:

In 2012 "advocates lobbying for a more natural, challenging schoolyard announced the formation of the International School Grounds Alliance, a global voice to address the “increasingly sedentary and risk-averse generation of children disconnected from nature.” Its members hail from Australia, Canada, Germany, Japan, Sweden, the United Kingdom and the United States — all countries hoping to trade ideas and become an influential force that will help schools see the learning opportunities that can come from peering under rocks and maybe even skinning a knee during recess."

Urban Planet has also blogged about the new phenomenom: Natural Palygrounds.  And if you are at all interested in this movement you MUST meet Willa Black:

"My employer, ING DIRECT put forward a staff challenge to come up with an idea to get as many employees as possible involved in a community improvement project. I put forward the winning idea of building the city of Toronto’s first natural playground.  On September 17th 2009, close to 500 ING DIRECT employees transformed McCleary Park into an innovative playscape featuring a hill slide, climbing boulders, sand area, musical instruments, mature trees as well as an inverted tree." 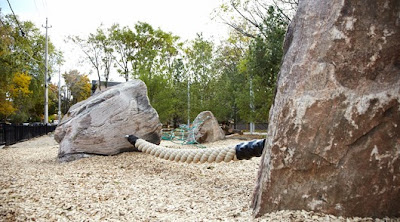