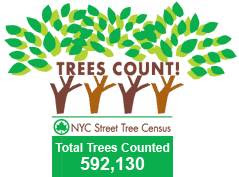 We learned about this project, which was done in 2005-2006 in class. To do this tree census almost 1000 volunteers, logging over 30,000 volunteer hours over 2 summers inventoried 592,130 trees.  They were given 3 hour orientation training and field guides to help and then city field staff were available for follow up by  responding through telephone hotlines and e-mails to address questions.

Staff would verify inconsistencies in the field after the forms were returned and reviewed.  They used paper since at the time of inventory they were the best method of collecting data despite the time required in office to transfer the data. The implementation of software was not yet at a point where it could be used effectively so data collection via paper and pencil was used and later transferred in an office

Today there is an app for that!

The tree id app, www.leafsnap.com was first developed in New York City as a means for tourists and interested residents to walk up to any New York City Street Tree, enter the GPS co-ordinates or ID tag into a smart phone and the information about the tree could be accessed

The response for a tree ID phone app was so high, Leafsnap was born!

It currently contains an ID database of New York City, Washington DC and a partial list of all trees in Northeastern America, in process of completion