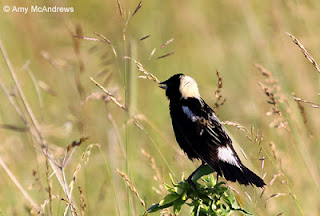 Taken from a newspaper article (dated March 2012) from the Kawartha Lakes Region regarding the new species at risk legislation that is coming into effect.

“The great thing about the Endangered Species Act is that it has a fair bit of flexibility,” she said.

“The focus for us (Ontario Nature) is research and best practices, such as are there ways to manage hay fields...but, the key to the round table is that whatever the solution, it has to work - for the farmers and the birds.”

(D & C Editor has heard that in the U.S. some farmers are compensated monetarily for the early crops that they cannot harvest in order to let Bobolinks nest safely and raise fledglings until they can leave the nest.)

Farmers vs Boblinks or Farmers AND Bobolinks?

Legislation will come into full force in 2014.


Can We Have Urban Bobolink Habitat?

The Quest to Find an Urban Bobolink