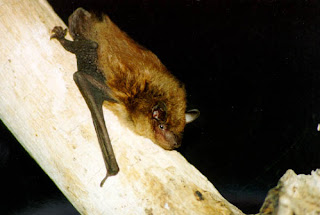 Interesting information on the urban population of bats:

- Bats can slip through openings the size of a dime, so identifying their entry points is tricky. They usually find their way in through chimney tops, vents, open doors or windows, broken screens, eaves and loose roof shingles.

- Warm weather drives bats from colonies within upper walls and attics to lower areas in houses.  During the daytime, bats sleepwalk down the spaces behind interior walls, later finding openings leading into houses’ living spaces where they fly about in confusion.

- Urban bat colonies tend to be quite small while buildings in rural areas can have populations that number in the hundreds. Rural populations are higher because of access to insects.

- A single bat can eat three times its weight in insects every night.

- This summer animal wilflife control companies in the area say calls for help soared in the recent heat wave  (more than 100 calls a day).

- The explosion of calls is also likely related to worries over a recent warning from the city’s health department that a dead bat in the Ottawa area was found to have rabies.

- Most of the bats are non-migratory big brown bats whose urban populations seem not to have been decimated by white-nose syndrome (WNS), a deadly fungal disease that has killed millions of mostly smaller bats in Canada and the U.S.

For more information there is also a great post on a Big Brown Bat visitor on Seabrooke Leckie's Blog - The Marvelous in Nature.