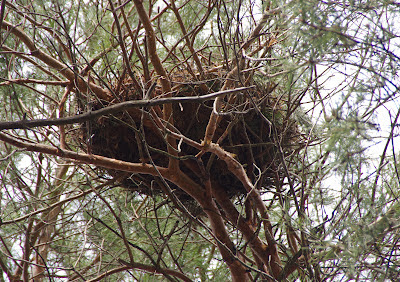 In Ottawa, there was a peregrine falcon nest directly across from our director's office on the 18th floor. The building across had no windows at that height and just this amazing ledge that was perfect for the bird. Sometimes we would see a pair of them circling on the other side of the building where the city opened up to LeBreton Flats and the river.

I started thinking about this bird today, at the end of our Wildlife Observation class. For our field observations, we had wandered around the (small) Scotch Pine Plantation on campus and saw over ten large (2-feet wide) nests way up in the tops of the trees. In the first semester, one of the teachers gave us an overview of the "activity" on campus. He told us that there are Cooper's Hawks and Barred Owls nesting in the Scotch Pines, there are Ruffed Grouse in the southeast corner in the woods (part of which is a cedar stand close to the river) and that students/faculty have also spotted Great Horned Owls and Osprey close by in the back fields and even Bufflehead visiting during their migration. I've even heard that some students have seen dead mice hanging on thorns (which is a sign there is a Shrike around).

So to investigate the larger nests in the Scotch Pines, I found the Cornell's Lab of Ornithology with some information on the Cooper's Hawk nests:


Nests are piles of sticks roughly 27 inches in diameter and 6-17 inches high with a cup-shaped depression in the middle, 8 inches across and 4 inches deep. The cup is lined with bark flakes and, sometimes, green twigs.

Cooper’s Hawks build nests in pines, oaks, Douglas-firs, beeches, spruces, and other tree species, often on flat ground rather than hillsides, and in dense woods. Nests are typically 25-50 feet high, often about two-thirds of the way up the tree in a crotch or on a horizontal branch.

This website also indicates that the Cooper's Hawk has easily adapted to our urban and suburban developments. So this is definitely a possibility! We did see and hear an American Kestrel today also but they nest in cavities (and do take to nest boxes just in case you want to build one!).

I have heard that crows will take over large abandoned nests and Barred Owls will use abandoned nests also (they preferred cavities though). We just received a handout on snag trees and important nesting trees for our Forestry Measurement class but unfortunately it's at school - it actually helps you identify which type of raptor built the next depending on the materials, the location and the height of the nest. 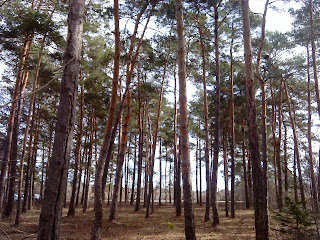