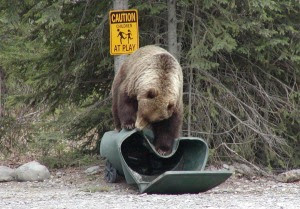 "People often mistake a bear clacking his jaws as threatening, but he is really saying "get out of here, leave me alone and don't hurt me," Stringham said.

Non-threatening behaviour and sensitivity to body language usually defuses the situation, he said.

Some cities are now ensuring there is a green corridor so lost wildlife can be escorted out of town, he said."

To study or to act:

"Still, $3 million (for a bear census on Kenai Peninsula) would buy a lot of bear-resistant garbage cans and fund a significant outreach campaign to educate the public about decreasing bear attractants. That may be a better use for the money, Selinger said. As much as he’d like to have an answer when people ask how many bears there are on the peninsula, he’s hesitant to be enthusiastic about a census without knowing how valid that result would be."

From the Redoubt Reporter.

Photo Credit: Larry Lewis, Alaska Department of Fish and Game
Posted by Urban Girl at 7:59 AM