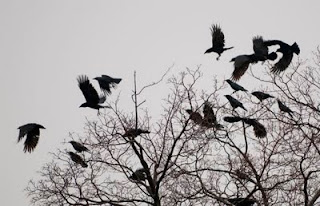 Amber of Unstuffed Blog posted earlier this spring about the editorial regarding the crows of Alta Vista (Ottawa). What was heartening was reading some of the comments supporting the crows...

It is disappointing to see the "kill them" attitiude whenvever there is a conflict between wildlife and humans. I lived in Riverview Park for 15 years up until a year ago. Yes there are lots of crows compared to other areas. So lets find ways of working with the influx of crows. We have adapted to ever increasing numbers of people. A little balance is what is called for. It may be we have to adapt to the increased numbers. Crows aren't "creepy". That is an attitude that needs adjustment. If you take the time to get to know crows, they are fascinating - smart, loyal to their families and resilient. They are ominvores just like people. I think more education on efforts to co-exist would go a long way to helping the problem.

Well, I live right next door to those ol'crows at Baleena Park. In fact, I go to work around the time they are just getting up and starting to move about...I have yet to step in any poop, despite occassionally seeing some on my truck,which could have been left by the one of the large number of sea gulls in the area.

At night when the crows "come Home" from their day of scavaging and eating garbage it's cool to see them come into the neighbourhood in small squadrons all lining up on the roof tops waiting for their turn to park for the night in one of the tall trees.

In the morning, even though they can be a bit loud, it's cool to see them circling around and heading off to their business......Leave the crows be you anti-nature creeps and learn to enjoy what little nature is left in your city-ass lives!

Sheesh some poeple are just jerks.....

What's with the idea of tying an owl to bait crows ?
Or people suggesting we open shooting contests ?
Or culling geese ?
Or poisoning crows ?
Seriously, folks suggesting that have personal issues.
Is that how you treat people also ?

Can't anyone here just enjoy nature anymore ? Respect people and animals around them ? Not be violent ?
Ottawa used to be nice with the greenbelt, the surrounding woodlands and fields, the geese and birds and swans. It was a great and safe place to bring up kids with people who enriched lives rather than trying to take them away.
What happened ?

It is very true that it is a necessity to clear crows away from areas where they can cause damage, and endanger people's lives, but is the best idea that the City Councillor can come up with for protecting the hospital helipad really one that involves torturing an innocent owl?

And how much of a necessity is it really to clear them completely out of the neighborhoods? Because they get into garbage bags? We have to protect our garbage from racoons anyway. Is the bird poop really a big issue? I see the great flocks of these birds everyday when they are roosting in the trees, flying overhead, and walking in the grass, but I have yet to notice any bird poop.

The presence of these birds does bring joy and pleasure to some people, who like to see a bit of wildlife where we live, to remind us that we are not just machines living on a paved earth. Do we really need to destroy a great part of nature just because it provides a slight inconvenience to some?

I live near a crow's roost, and I can't believe what I am reading. I have never once considered them a nuisance.

I get that we need to keep them away from the helicopter pad, although the method seems very cruel to the owl. But other than that, people are just being silly.

The crows are fascinating to watch,and they do a fabulous job of cleaning up the neighbourhood of small dead animals, of which there is usually an abundance. We are also overrun with squirrels, bunnies,and field mice. Which, by the way, is what likely attracts the crows to these areas.Not to mention they clean up some of the garbage the filthy humans leave lying about.

I am overjoyed to feel like I can live amongst nature so close to the city centre. I don't get that the crows, or any other animal, are a nuisance (except when safety is a factor).

Neighbours who make a pastime out of complaining, now them, I would like to get rid of.

Owls will attract agressive attention from a large murder of crows. i wouldn't want to be the owl that gets this job.

Nobody complained when people built houses on the crows homes. The crows are just returning the favor!

"Dear Residents of Alta Vista, We're not sure about how you redecorated our forrest, but thanks for all the garbage.

Email ThisBlogThis!Share to TwitterShare to FacebookShare to Pinterest
Labels: birds, fauna, living with